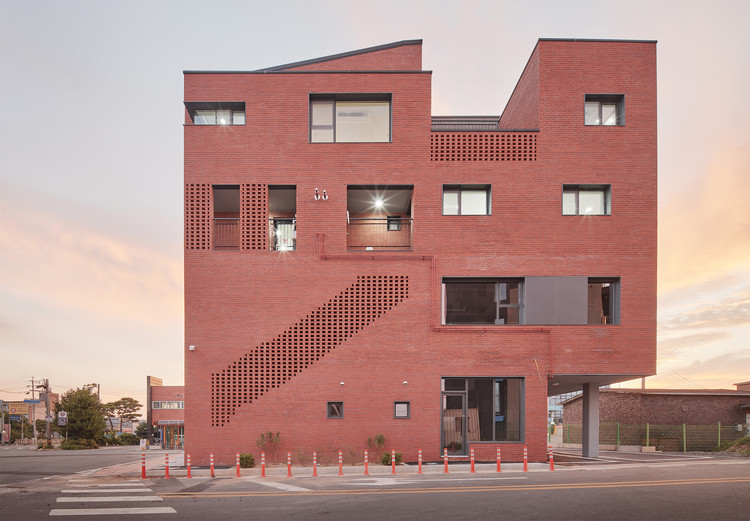 Text description provided by the architects. The design began when I met the architect who decided to build a shopping district house that could solve the two factors: the residence and rental income of the main household (parents and the couple) on a detached house with a garden where I lived with my mother since childhood.

Although it was inconvenient to live in due to the aging of the house I lived in, I decided to sell land with long memories and build it with the desire to live in the current place where I can maintain relationships with people rather than settle down elsewhere. It was the building owner’s requirement to make room for one-room households according to the current trend so that the vacant rooms of the rental facilities can be minimized and variable rental space can be constructed in the shopping district.

Basically, the building design was developed by avoiding interference between users through floor separation and height, and by separating access lines using the back road, the movement of shopping district users and home users does not overlap. The board makes the most of the characteristics of the land that meets the three-sided roads, separating residential and shopping routes. A residential route was built on the back road near convenience facilities such as marts and bus stops, and a road near facilities such as a face office, police box, and post office was designed to suit each person’s role. Although it is a shopping district house, the terrace and courtyard connecting the outer space are provided in the living space to provide a sense of openness and comfort while blocking the eyes of many and unspecified people by using the semi-open area loading.

Space. Because of the nature of Anseong area, the rental shopping district is designed to accommodate the needs of various tenants by taking into account the access flow lines and toilets of each floor and connecting the second floor to the first floor or renting in the case of the second floor.

In the case of rental housing, the concern between 1.5 rooms and 1 room was finally selected as a one-room structure with a terrace through a design meeting, and each household was provided with an external terrace to ensure comfort. In the case of the owner’s household, the house is separated by considering the privacy of the parents, and the existing detached garden is raised in the courtyard on the fourth floor to form a space for intergenerational privacy and family gatherings.