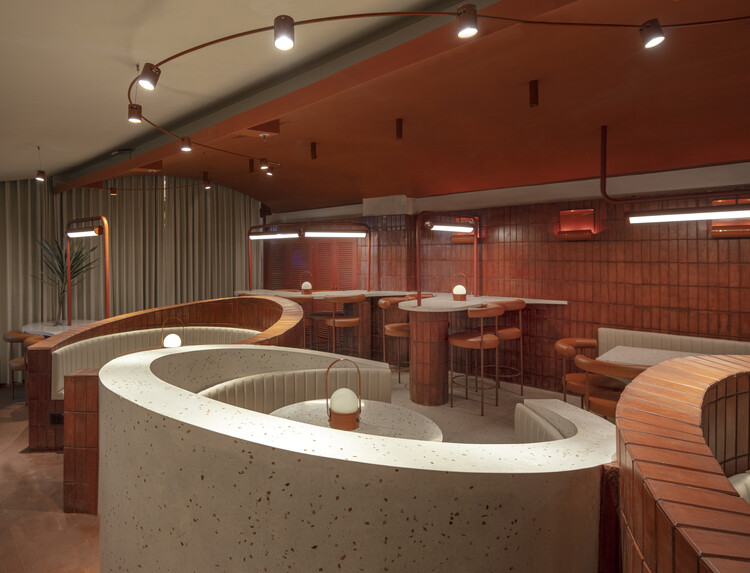 Text description provided by the architects. The syzygy amidst opposing forces, the coexistence of the Yin and Yang, and the constant state of dichotomy the mind exists in seem to keep the balance restored in the world as we know it. At Rosie &Tillie, our spatial imagination soars a flight that questions and beckons the concept of time to let loose. Think of it as the day and the night. Both opposite facets of the same coin, rarely ever crossing paths across the montage of the sky—except for when the new dawn takes over the reins from the night and when the seductive shades of dusk bathe the sky, bidding the day that was adieu.

Despite this incessant tryst of duality and even when the world strives to confine everything they know into definitive boxes, at Rosie & Tillie the concept of polarity is rebutted with a childlike curiosity driven by awe. The architectural design language in the spatial narrative welcomes its patrons into its embrace, offering them two divergent ambiances under one roof as morning transfigures into the night. It is within these interstices of time that transitional design is born, claiming the role of the protagonists.

Nestled in an uber-bustling upscale retail hub in Saket–Delhi, the venue is the joint magnum opus of millennial entrepreneurs Vicky Mandal and Chef Anukriti Anand. The delectable cuisine is brought to life by Anukriti’s all-woman brigade of chefs. The fuelling impetus of their vision reaps inspiration from offering the patrons a quintessential hospitality venue that is emblematic of the confluence of celebrated beverages. In the cauldron of interpretations, root materiality and an uninterrupted medley of spaces brew unabashed magic. Ubiquitous leitmotifs of terracotta, warm white terrazzo, curated greens, and curvilinear silhouettes claim the volume whole, creating an uninterrupted visual spacescape that allows the humble materials to garb themselves in the cloak of versatility against which functions unfold.

The design approach herein steers clear of the conventional thought of bifurcating the space, dividing it into two symmetrical halves which would each anchor the daytime bistro and the evening lounge respectively. Instead, the creative brief envisions both Rosie and Tillie as dynamic and emotional entities who imbue the venue with its binary yet coexistent persona in which the binding thread of subtlety weaves the experiential tapestry. Think of Rosie being the ever-so-charming and decorous soul sister amidst the two—her warmth lights up a room, she’s amiable, and that trusty pal who makes you feel like you’ve known her for eons. She’s that dose of sunshine on a gloomy brumous day. Tillie, well she’s an enigma—there’s this promiscuous aura about her that lures you in for more, even when you are giddy-headed every time she’s around and the air is heavy with mystery. She’s gone in a fraction of a second if you turn your gaze away.

The space too transitions from a daytime caféinto an evening gastropub with the inherent energy of the venue becoming the frontrunner. Much like the two starkly different yet inseparable friends that Rosie and Tillie are, the venue also shapeshifts in character as the arms on the clock revolve and brings its guests the best of both worlds. The almost fiery hue of the terracotta tiles washes over the vaulted ceiling, furniture, and segments of the meandering flooring. In a response to this, the speckled white terrazzo makes its cameo across the remainder surfaces, balancing the interiors with an overruling feeling of ingrained serenity. The juxtaposition of these contrasting yet complementary elements surges through the entirety of the space, allowing them to coalesce in undisputed harmony.

The open floor plan is earmarked by a sinuous spine of private booths that etch the spatial volume with a sense of visual dynamism. The hybrid of experiences ranging from the daytime bistro-esque identity morphs effortlessly into the moody lounge by evening via the vocabulary of materiality and lighting that render the venue in a binate mien void of physical demarcations. The perimeter of the floor plan is dotted by dining nooks that make way for communal dining in intimate groups illuminated by bespoke luminaires that are artistic installations in their own right.

The external façade with glass fenestration systems has been layered with diaphanous drapes in ivory to lend the space indoors with privacy while creating a tangible threshold. Outdoors, a collage of tables enjoys alfresco views of the context as the patrons subconsciously submit to the milieu that draws the min compellingly. Unshackling itself from the expected and presenting the antithesis to a singular-function space, Rosie & Tillie acquaints the capital with a sensorial experience that beguiles the sun and the moon alike. The distinct dual DNA of the space shares the spotlight and revels in the conjunction of the antithetical that somehow remains romantically amalgamated.