When the Architect Designs for Communities: 9 Popular Residential Designs

Housing will always be a theme and challenge for architects. Thinking about it in a way that serves the entire population, including the most precarious contexts, is one of the most complex, and perhaps impossible, tasks to be fully consolidated. Each place and family will always place different priority points on a project, which is why resorting to a standard solution is not ideal. However, several proposals present intervention possibilities that create an intricate seam between the most different factors: basic infrastructure, program, self desires, aesthetics, budget. For this reason, we have gathered here some Brazilian examples of affordable housing, ranging from a single-family house to large residential blocks. 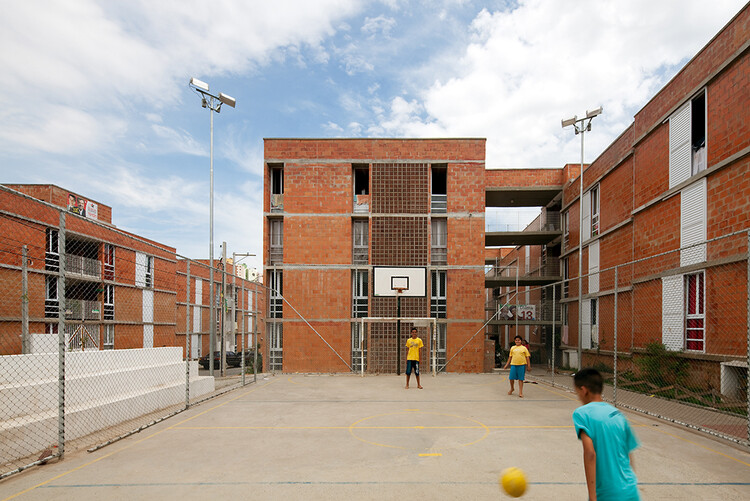 However, before analyzing the selected projects, we think it is fundamental to pay attention to a critical analysis of what would be the role of the architect when he or she intervenes in these spaces.For this reason, we bring here an important question from Paola Berenstein Jacques, present in her article Estética das Favelas: “From the most extreme case, where the favela was purged and its inhabitants relocated in Cartesian modernist housing projects, to the current milder case, where the architects of the so-called postmodernity began to intervene in the existing favelas in order to transform them into neighborhoods, the rational logic of architects and urban planners is still a priority and they end up imposing their own aesthetic, which is almost always that of the so-called formal city. In other words, the favela must become a formal neighborhood so that better integration with the rest of the city becomes possible. But haven’t favelas been part of the city for more than a century? Is this formal integration necessary?”

With these questions in mind, we invite you to check out projects previously published on ArchDaily, which bring different ways of thinking and intervening in more popular contexts, from favelas to rural areas, accompanied by texts taken from their descriptive memorials.

Vila Matilde House is probably the best-known example of a successful intervention by architects in communities. In it, Terra e Tuma Arquitetos Associados relied on its own experience in structure and exposed blocks, to make possible low-cost work, with greater control and agility. According to them, the biggest challenge was the initial phase of the work: four months of carefully demolishing the old house, while building the foundations and supports that propped the neighboring houses, supported by their boundary walls.

Six months after starting the construction of the masonry, the house could be completed. The highlight is in the central area of the house, with a patio that fulfills the essential function of illuminating and ventilating the rooms of the residence.

Coletivo LEVANTE was responsible for the work on House in Pomar do Cafezal. In it, the classic 8-hole block determines the materiality of the house, but it is seated horizontally, revealing its beaded face. Something very unusual on the hill, since laying the block upright is faster and uses less material. According to the architects, the idea was to ensure better thermal inertia for the house, since with horizontal placement, the width of the wall will correspond to the largest dimension of the block. In addition, this modular element was explored in different ways, in some situations it appears as hollow bricks, or combined with concrete blocks, due to a structural need.

Thus, the constructive repertoire – so typical of the collective efforts – was maintained, regarding the structure and the exposed brick walls, and the project’s attention to issues related to the flow of rainwater and its absorption on the ground stands out in the project; the search for generous natural ventilation and lighting, in addition to temperature control with light elements such as plump pieces of eucalyptus and vegetation.

In the challenge of thinking about housing as an honest space for those who occupy it, NEBR arquitetura conceived Paudalho Popular Houses, inserted in a more rural context. Implemented in modest plots measuring 8m x 20m and carried out by low-skilled local labor, the construction period took just 120 days.

Here, “the architectural party comes from the shadow, gravitating a certain substantial rhythm to the precise calligraphy of straight lines in formal balance. The scarcity of meek contours presides over the haughtiness of points and edges in the geometrical precision. The project re-questions hostile dimensions and forceful principles of spatial economy stigmatized by the popular house. In the enjoyment of the void built from the drawing in height, the sky becomes the horizon because there was little ground”.

Faced with an existing precarious situation, configured by self-built wooden or masonry houses, with one or two floors, built in areas at risk of collapse, flooding and contamination. Jardim Vicentina Urbanization, carried out by Vigliecca & Associados, foresaw the removal and relocation of the residents of the most critical areas on the banks of the stream, and the implementation of three different typologies, grouped linearly along the channeled stream, defining two new urban fronts on either side of the proposed services road axis.

In it, the construction method of an apparent structural ceramic block was chosen for a better thermoacoustic performance and low maintenance facades.

In it, the construction method of an apparent structural ceramic block was chosen for a better thermoacoustic performance and low maintenance façades. Also carried out by Vigliecca & Associados, Residencial Parque Novo Santo Amaro V had as a general guideline the creation of a green central axis along the existing watercourse, rescuing the original condition in the region of the springs of the Guarapiranga dam. “The project builds several ‘portals’ increasing the number of accesses to the linear park, and reducing the isolation of the interior from its surroundings. With the same purpose, two metallic walkways that connect the two sides of the slope passing above the park are included in the project.”

According to the architects, “the families removed from the site will be relocated to housing units created in the same area, with a greater number of apartments, which will meet the demand of other sectors in the region, which are also in risk areas”.

Another example is the Re-Urbanization of Sapé, which serves 2,500 families in precarious living conditions in the Rio Pequeno neighborhood. Carried out by the offices Base Urbana and Pessoa Arquitetos, the project is based on the urban seam between the two banks of the stream, based on the design of public spaces, becoming a tool for inclusion as its actions design opportunities for connection, social encounter, experience and exchange in urbanized public space.

“The project provides a relationship of permeability between public, collective and private areas. (…) The building includes seven types of housing unit, in addition to commercial and service units. The amount of each type was defined by surveying families throughout the work. The construction system adopted was optimized with the standardization of openings for doors and windows, hydraulic walls with fixed plumbs provided cross ventilation. the horizontal movement of people transposed a living space existing in the alleys of the favela to the floor, creating the opportunity for exchange between families on the same floor”

Residencial Alexandre Mackenzie is part of the urbanization actions of Favela Nova Jaguaré in São Paulo with the objective of carrying out part of the resettlement of families living in risk areas. Carried out by Boldarini Arquitetos Associados, the implementation of the complex explores the relation between public and private space by proposing roads, alleys and areas for collective use that integrate with the surrounding streets, enabling new connections with the existing fabric.

“The set consists of two architectural solutions, buildings and overlapping houses, whose main element of organization is the arrangement of common areas directly related to the circulation structures, forming spaces of continuity to the house.”

In turn, Residencial Corruíras was built to enable the resettlement of residents of Favela Minas Gerais, in São Paulo, an irregular occupation that bordered the site. Designed by Boldarini Arquitetos Associados, the complex is located on a land with a steep slope close to the Água Espraiada stream, offering a unique opportunity for the perception of the relief and landscape.

In the project, the horizontal movement of people with walkways as a structuring and articulating element of the set was valued to reinforce the idea of collective space as a place of exchange, in a reference to the balcony present in the “Brazilian house” that looks at the internal courtyard.

Finally, Heliópolis Social Housing, created by Biselli Katchborian Arquitetos, occupies the urban block on the periphery, forming an internal courtyard with public access, aimed at the leisure of the residents of the complex.

Here, the topography of the land is used in order to maximize the number of apartments with access at different levels that are connected by walkways, whose metallic structure solution makes them unique in the set, and forms the covered leisure areas of the set. The unit distribution and the use of colors were decisive for the reading of the set as different towers without, however, losing the notion of belonging to the whole.